The holidays that I had recently has been awesome and I can’t believe that I’ve accomplished so many things during this period of time. Firstly, I have been featured together with Calvin in the local newspaper, my paper <<我报>> which you can read more HERE.

During the holidays we have also accomplished setting up our website, Kanggie which is a social networking site targetting internet marketers, internet marketing enthusiasts and anybody interested to know about how to make money online. We are so thankful that we have set it up right before school started! 😀

Here’s the other exciting thing, I was actually invited to go onto a local programme on TV called Shoot!. The show will be airing this thursday, 8pm on Singapore Chinese Channel U. t was a whole new experience for both me and Calvin. Though I was really disappointed that we couldn’t go onto the show together, it was still a great experience for the both of us – a closer touch to our ‘stardom’. This touch of stardom came sooner than we expected and we are really thankful for the show producers and the expert panelists for noticing the both of us when we were featured in the newspaper article.

The topic was on Blogging and how blogs are being utilised in many ways. From being an online diary to an informational site to one that was being utilised by aspiring entrepreneurs to create their own businesses. There are many people who are making use of their blogs to sell products and to advertise their services in graphics design etc. For instance, how Calvin and I have made use of the blogs that we have set up to help us market informational products. All these activities that we are involved is called “Internet Marketing”. We are definitely proud that we are made ‘ambassadors’ of this trend that is starting to rise only in Singapore now, though in the US, it is a rather huge industry already.

Anyway, the show was hosted by Dasmond Koh and Quan Yi Fong with Janice Ng on the expert panels. Guests included myself, my friend Chong Tak (who was coincidentally on the show!!!) and star and proud bimbo blogger, Xiaxue and infamous entertainer Steven Lim (which you should read with caution). It was interesting to understand the planning that goes behind the production of an episode of the show. Professionalism was at its peak and I was just amazed at how confident the hosts are on the show and the crew behind the show, who unfortunately can go unnoticed for their efforts..

And something amusing cropped up between Dasmond and Xiaxue’s blogs, which you might want to check out! Well, I must say that Xiaxue’s professionalism was tested at the show and well, I can’t blame the hosts for wanting to stir some controversy on the show with the obvious animosity between Xiaxue and Steven Lim. Frankly, as a 3rd party and fellow guest on the show, I can either choose to think that Steven and Xiaxue were both there to shamelessly gain publicity for themselves as icons or star bloggers or just think that the both of them have really ‘substantial’ points to make about well, themselves. Lol! It’s for you to decide. But anyhow, I think Dasmond’s reply to Xiaxue was aptly done.. (patricia wonders, “but then again, is it just for publicity again?”) 😉 Watch the show and catch the content of our discussion which revolves around blogs and what people seek to achieve with it.

Here are a couple of photos which capture the bliss that I felt at the recording day: 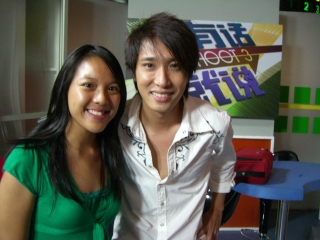 Me and Dasmond, who I really adored when he was deejaying for 933FM. 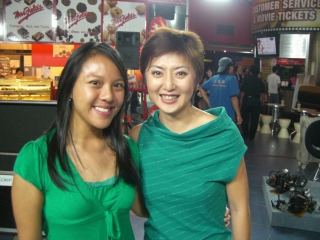 Quan Yi Fong, one of the wittiest Chinese hosts that I know in Singapore TV. 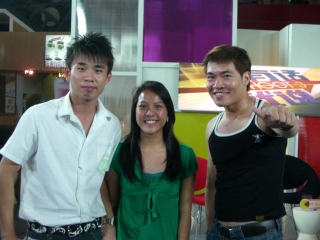 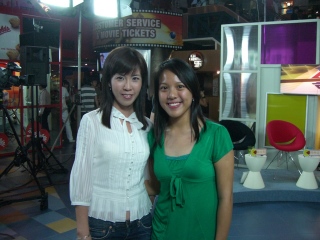 Janice, one of the Chinese newcasters on Channel 8. She’s really superb and friendly. Amazingly bilingual too!!! 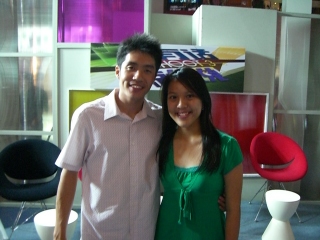 Lastly, Calvin was with me, supporting me as I made my way through with broken Chinese yet sounding superbly confident (amazingly to me).

Do You Know Who Is 林如晶 (Lin Ru Jing)?

Meaning: Its source is Patricius, a Latin name meaning “Aristocrat.”

Wow! A royalty shared the same name! How cool is that?
But what is in a Chinese Name? Especially something like mine 林如晶?Plenty. But does anyone know?

林 Lin is my family name and 如晶 Ru Jing means As Bright. I have no idea what my name means but I’m sure if i want, I can accord that my name partially helped boost my intelligence! Lol!

So, why am I making such a fuss over my name in this blog post?

Well, I’ve been so used to introducing myself in blogosphere and online communities as Patricia Lin that when an article came out on a local chinese newspaper on me and Calvin, everyone was amused that I’m Lin Ru Jing!

Don’t get me wrong. I love my chinese name but well, unfortunately, I wasn’t proud of it since I was a child. I think it’s because I’ve always been teased about it in school. But anyhow, I’m really proud of my roots and my chinese name that I’m declaring it here! 😀