What Kind Of Person Are You?

Apologies for missing out on blogging for the past 2 days because it has been a really hectic and crazy weekend for me and Calvin. We were really busy with our school work, workshop and also attending a seminar by Johnny Wimbrey on Saturday. 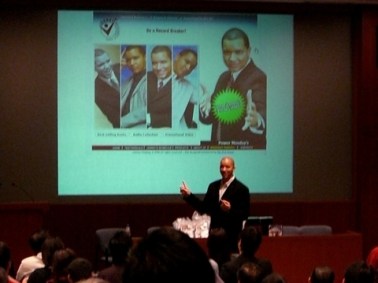 It was definitely a great seminar where I really felt recharged and in a positive mindset after hearing the words of this motivational speaker from Success University. He shared something really interesting – the 3 kinds of people in this world. And it’s really cool that after the entire seminar, I brought home a great message for myself and that is ‘always be in the action because only then will you have the best experience’.

So, which of the 3 kinds of people are you? Here’s more..

Characteristics: Someone who watches and talks about something happening without witnessing the actual action. He/She talks about the incident that happened as though he/she knows the exact details.

This kind of people, are just easily satisfied with just being in the know. They do not make a conscious effort to be part of an event or to create things. They just like to listen to what Spectators tell them and tell others about it.

Information that they give can be potentially wrong because well, they are reporting something that they heard from others.

Spectators are brave enough to be where the action is and often be witnessing things as they happen. However they do not want to be the people creating the action because they are afraid to take necessary action and are easily influenced by the people around them.

They will normally share information with instigators and update them on what is happening in the game.

Characteristics: They are in the game and part of the action. They know that 90% of the game is constituted by preparation. They are the ones who create the action and are not easily influenced by the people around them. They are brave.

Participators know that it takes teamwork for a dream to work and they have the ability to make things happen. They are able to apply knowledge that they have, in the game. They do not let others dictate what they should do.

So, what kind of person are you? I hope that you’ll always be a participator and be in the action and creation of news rather than just listening to the news. It takes a lot of guts, preparation, effort and knowledge in order to be in the game and you have to manage your time to do so.

All the best and work towards creating your future and not let others create it for you! 😉

Learn the 10 Skills Needed For Success!

How To Build Professional Relationships

Would You Rather Be Rich Or Happy?